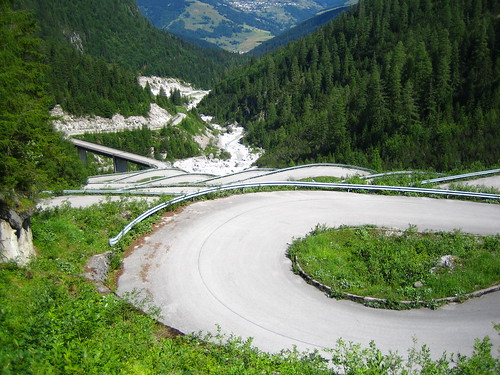 Description of the Forcella Lavardet road

Forcella Lavardet  is a mountain pass located at 1542 m above sea level in the Dolomites-Alps area. It connects the towns of Campolongo and Pesariis.
The artery that runs through the pass is the state road 465 of Forcella Lavardet and San Canciano Valley. The road starts in Campolongo, in the municipality of Santo Stefano di Cadore.

Before it became the place to be for driving enthusiasts, it seems like Forcella Lavardet used to be a military road. Now it could easily be Italy’s craziest road.

What is amazing about this mountain road is that it’s one of the world’s most famous hairpinned roads. It has turns climbing up and down the mountainside, perfect for a drive.

A hairpin turn (its name comes form its resemblance to a hairpin/bobby pin) represents a bend with a sharp inner angle. That is why, a vehicle that drives on this kind of road must turn almost 180° to continue its drive.

Between San Pietro and the peak Forcella Lavardet features a total of 14 steep and spectacular hairpin bends. There is a stretch from Campolongo until Forcella Lavardet that looks like a dirt road. In different sections it is bumpy because of the landslides.

Unfortunately, the route section starting from the km 2 + 500 to Forcella Lavardet  was closed to traffic in October 1993. This happened because of a flood of the river Frison that has removed the second Bailey Bridge located at km 2 + 800. As a result, the transit on that section became impossible. Yet, the situation of the road was very precarious since the time when the road was mostly paved. It was exposed to slopes with a strong risk of landslides.

Seems like local authorities have repeatedly called for the restoration of the road. Along its route there are also outlets for the aqueduct of Campolongo. Also, this is the only access route going to the Passo della Merendera, a climbing gym, and Casera Razzo. Today the artery is closed to traffic. Also because of the precarious conditions and the alternation of dirt and asphalt that has always characterized the way, this stretch of the SP 465 could be titled “the most absurd highway of Italy”.

A road for all driving entusiasts

Even if it offers a great drive this is a great road for motorcycle lovers as well. The thirst to travel some beautiful off-road paths can be noticed more and more often from this public.

As you will pass on iron bridges to complete the road, you will see many landslides and you will ride through a forest. This will certainly add up to the adrenaline rush of driving here.

And, finally, those 14 switchbacks! Maybe they are beautiful because nature is recovering all that was once hers: plants and wild weeds are covering the whole area. Also, the entire route is picturesque, so you can enjoy more than the drive, the scenery too.